Sullivan extends lead in standings with win in France

When it comes to tyre strategy, Zach Sullivan has been virtually untouchable in his North Border Racing Ferrari so far in the Canadian eMotorsports Network Formula 1 Series.

It paid off for the championship leader once again on Thursday, passing the MCRaceLab Honda of Mark Cox with four laps to go to take his second win of the season at the Lone Oak Brewing Co. French Grand Prix at the virtual Circuit Paul Ricard.

Sullivan saw his championship lead explode to 28 points over Darcy Ford, who was disqualified for failing to use two different tyre compounds on his Ares Racing Ferrari during the race.

Cox finished second to take his second consecutive podium finish, while Cody Cudmore grabbed the first podium of the season for Silver Hornet Mercedes, holding off the Alpha Flow Honda of Daniel Cudmore and the 519 E-Racing Bugatti of Angel Ortega at the line to finish third, with Daniel Cudmore grabbing fourth and Ortega settling for fifth in his Canadian eMotorsports Network debut.

Corbin MacAulay of Hurricanes eMotorsports finished sixth while grabbing the fastest lap bonus point, while Michael Dimitroff’s seventh-place finish extended Alpha Flow’s run as the only team to have both drivers finish in the points in every race so far.

Following a rainy qualifying session where MacAulay took his third straight pole, all drivers were able to select their preferred tyre once conditions dried up for the race, with Sullivan being the only driver in the top 10 to start on the hard compound.

As a result, Sullivan was able to stay out longer than the rest of the field, finally pitting at the end of Lap 18 for the medium compound where the majority of the field had pitted five or six laps earlier. From there, Sullivan used the fresher, faster tyre to chase down Cox, who led 16 out of 27 laps overall, before making the pass coming out of the Chicane Nord on Lap 24.

Cox led the opening 10 laps before being passed by Sullivan, while McLuckie used a great start to jump to second, though he was unable to sustain it on the soft tyres.

Next week, the Formula 1 Series is off to the virtual Red Bull Ring in Spielberg, AUT for the Rampage Coffee Company Austrian Grand Prix. The pre-race show will begin at 7:30 p.m. Eastern, with qualifying starting 10 minutes later, followed by the race itself.

Here are the final results from the Lone Oak Brewing Co. French Grand Prix on September 24. 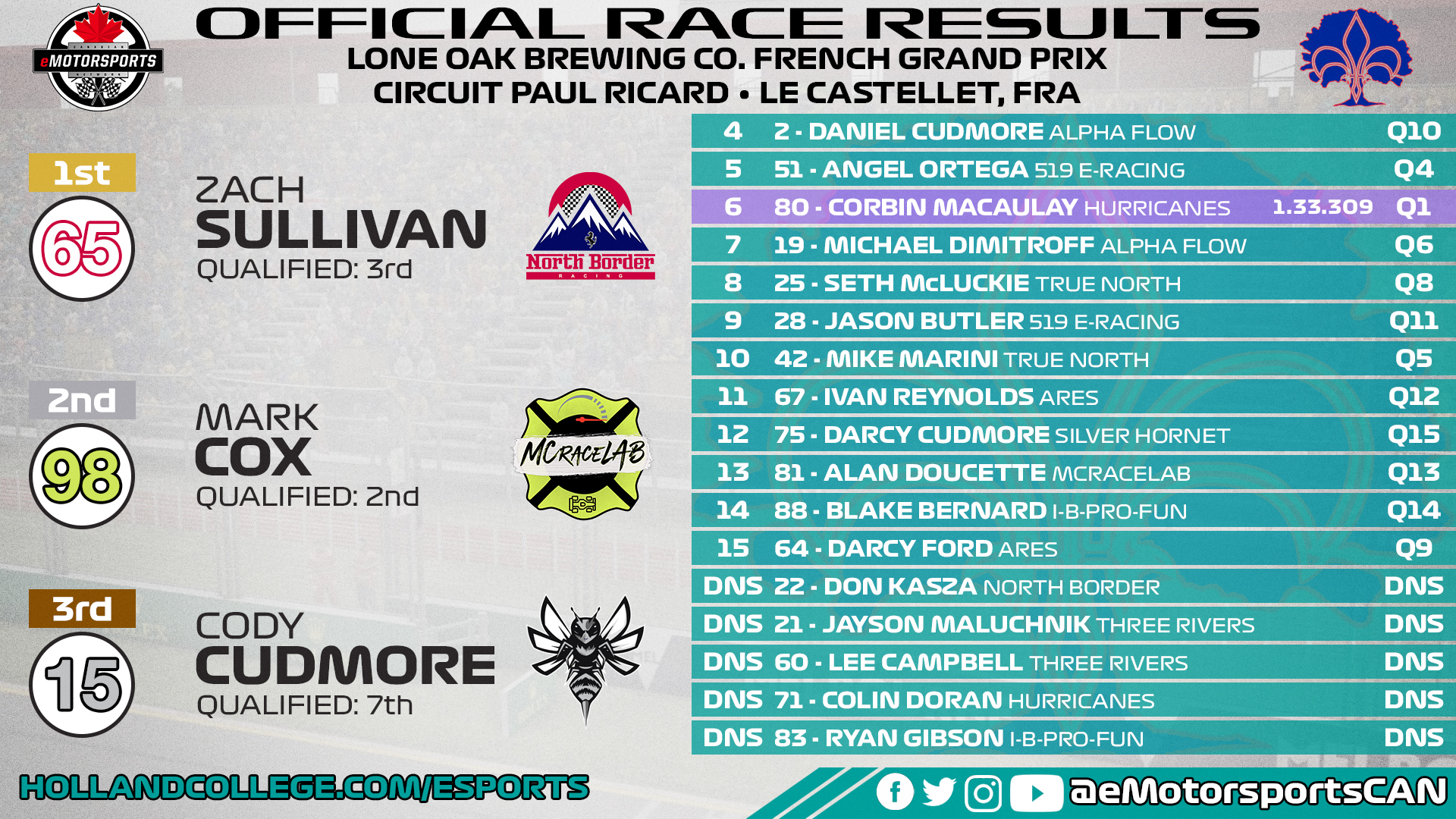