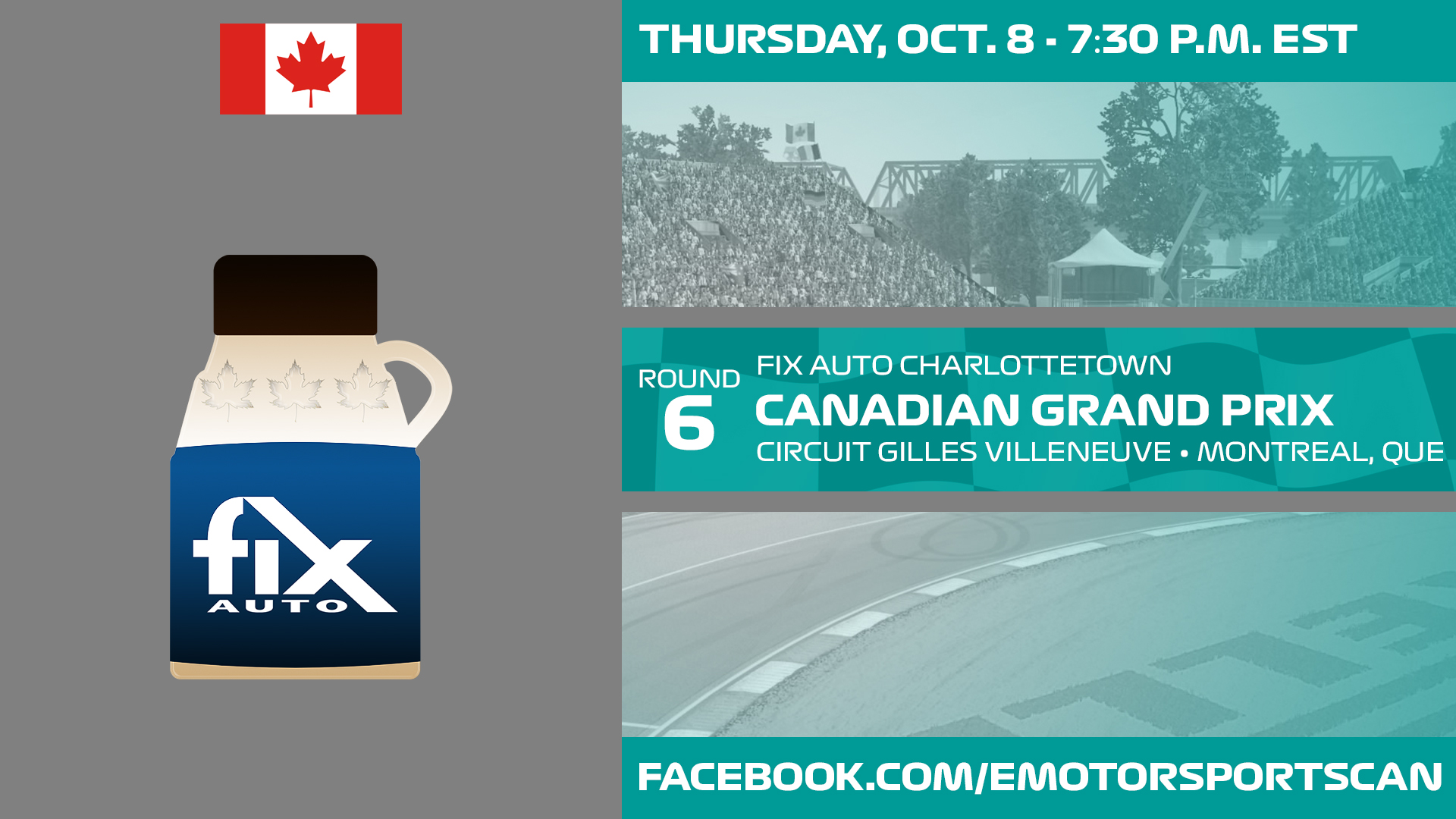 The Canadian eMotorsports Network Formula 1 Series is set for a homecoming, of sorts.

After racing in Europe for the last four weeks, the series crosses the Atlantic Ocean to head to the virtual Circuit Gilles Villeneuve in Montréal for the Fix Auto Charlottetown Canadian Grand Prix, the sixth round of the 16-race calendar.

The live broadcast will begin tonight at 7:30 p.m. EST with the pre-race show, which will also include live qualifying beginning at 7:40 p.m. EST, followed immediately by the race itself.

Corbin MacAulay comes into his home race on a high after winning two of the last three races, including last week’s Rampage Coffee Company Austrian Grand Prix, to move his Hurricanes eMotorsports Honda into second place in the driver’s standings.

Zach Sullivan, who finished second in his North Border Racing Ferrari in Austria, continues to lead the standings with 94 points to MacAulay’s 70.

On the constructors’ side, North Border Racing continues to lead the way with 109 points, good for a 25-point edge over second-place Alpha Flow F1 Racing, which continued its remarkable streak of having both drivers score points in every race of the season last week with Daniel Cudmore finishing fifth and Michael Dimitroff coming home right behind him in sixth.

Much like the Red Bull Ring last week, Circuit Gilles Villeneuve is one of the shorter laps of the season, measuring 4.361 km over the course of 14 turns. After crossing the start-finish line, it’s a short sprint into Turn 1, which then links into the winding Senna right-hander. A short straightaway will take drivers into a chicane comprising Turns 3 and 4, before another short straight to end Sector 1.

Sector 2 features longer straightaways, though drivers could potentially get tripped up in the chicane comprising Turns 8 and 9. Out of Turn 9, it’s a medium-length dash to the end of Sector 2, only to go hard on the brakes for Turn 10, the circuit’s signature hairpin. Upon exit, drivers will get up to top speed on the Casino Straight, which then leads into the circuit’s best overtaking opportunity, the final chicane made up of Turns 13 and 14, where drivers may brush against the Wall of Champions if they’re too aggressive on the exit onto the start-finish straight.

Here is a look at the standings entering round six.